Ever wonder where the “Net” came from? Well, I say the “Net” because there is actually a difference between the Internet and the World Wide Web. More about this later… 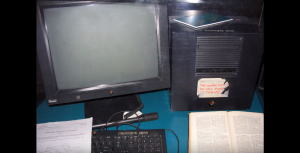 Humble beginnings of the World Wide Web or the Net, which is it?

This is the single computer Tim Berners-Lee created The World Wide Web on… If it were to be powered off, the “web” would have come tumbling down! Thankfully today there are redundancies set in place so that this can’t happen. It just puts the whole thing into perspective, doesn’t it?

Berners-Lee is also the director of the World Wide Web Consortium (W3C), which oversees the continued development of the “Web” we all use and love today.

The Internet is the global system of interconnected computer networks that use the Internet protocol suite (TCP/IP) to link devices worldwide. It is a network of networks that consists of private, public, academic, business, and government networks of local to global scope, linked by a broad array of electronic, wireless, and optical networking technologies. – Wikipidia

If you are interested in learning more head over to this awesome youtube channel by clicking this HyperLink –>VSauce – The Web Is not the Net.