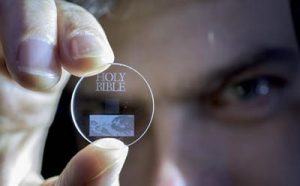 Backups may be a thing of the past sooner then we think. The scientists at the University of Southampton have invented what many are referring to as “Superman Memory Crystals”. Quarts crystal disks that have the ability to store a massive 360TB of data for over 13.8 billion years at the extreme temperatures of 190°C & is even stable of up to and possibly exceeding 1000°C. This has opened up a whole new World of perpetual data storage.

Elon Musk has even included one of these “Memory Disks” aboard the FalconX with the Tesla when they launched it into space back in February.

This form a data storage won’t be available to the consumer realm for quite some time yet. Until then we all still need to be vigilant and continue to back up our valuable data as safely as possible. The current best practice for keeping data as safe as possible in the unfortunate, unforeseen event of hardware failure is to follow the 3-2-1 Backup Strategy. A 3-2-1 strategy means having at least 3 total copies of your data, 2 of which are local but on different mediums (pc & external disk drive), and at least 1 copy offsite ( in the cloud ). The first two copies are your responsibility but for the “Offsite” backups Computer Corrections has you covered with our Cloud Backup & Storage service that starts at a low $5 a month!